Observations on the We are Bonds Birthday Project

Two brands went into self destruct mode this weekend. The first was the Australian Labor Party and the second was Bonds. The Birthday Project went viral pretty quickly throughout the ad industry and then got some priceless publicity on TV. Mumbrella said it was campaign of the year and the Bonds PR machine was working over drive. The campaign was then derailed by a bunch of technical glitches and poor UX. Brand advocates/people wanting free stuff quickly became brand skeptics/rejectors. Here are some observations

1. Above the line agencies aren’t always best placed to do big digital executions.

2. When your campaign has a four minute call to action on Australia’s most popular tabloid show – Today Tonight – expect your servers will get slammed. Load balancing should be a budget line.

4. Include moderation caveats for photos before submission and not three days after via an ambiguous email. 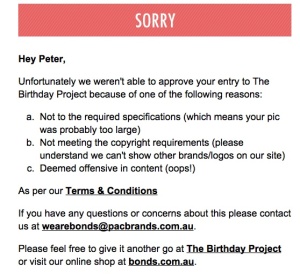 5. People want free stuff and Bonds giving away t-shirts to their users is a great way to incentivise brand engagement.

6. Mumbrella is fast to congratulate but also slam down new campaigns (articles below).

7. Despite a clever idea, the poor execution will leave many disheartened and with a reason NOT to buy Bonds which is a real shame as ideas like these should be successful. Bonds is the type of lovable Australian brand that doesn’t need to take risks but through complete negligence it has let its fans, consumers and users down.