Why I love: Spotify 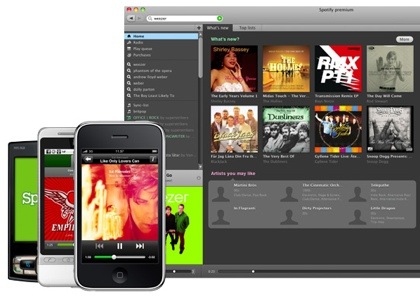 Spotify has been around for a while yet it only launched Down Under a month ago. I use it every day on my iPhone during my daily commute, via my WDTV in the living room (which is now basically my home stereo), at work (weirdly configured with Sonos to play music throughout the office) and, if I want to crank the Spice Girls, on my work PC (with my awesome new Beats by Dre Monster headphones). I’m using it now while I write this blog post on my iPad. Bobby Womack’s new Bravest Man in the Universe in fact.

Although data storage is exponentially increasing I only have a 32 gig iPhone so can’t take all my music with me. Via the mobile app Spotify allows me to stream high quality tunes from a vast catalogue. My 3G network can let me down, particularly in car parks, but it’s not too bad and, with 4G networks about to roll out, should be minimised down the track.

Spotify also integrates superbly with Facebook pulling in your friend’s playlists and pushing out your listening history (similar to last.fm‘s ‘scrobbling’). You can subscribe to your mate’s playlist and get notified whenever they are updated. I discover new music via playlists (both friends, celebrities and trending) but also Spotify radio which streams music based on a genre or artist). Like Jamiroquai? Well the Jamiroquai radio station includes tracks from similar artists such as Stevie Wonder, Earth, Wind & Fire and Michael Jackson.

Spotify allows track cross fading, a feature still missing after 11 versions of iTunes, which is handy for party playlists where you want to avoid the lull in between killer tunes.

Whilst the catalogue is growing by the day a music lover may be annoyed with some tracks ‘unavailable’ presumably due to licensing restrictions. For example, only a handful of songs from the marvelous Standing in the Shadows of Motown soundtrack are available to stream in Australia.

Nevertheless, at a bargain $14 a month for unlimited music it makes me wonder how long it will be until an affordable and decent streaming video subscription service will be available.

Check out my ‘This is Winter’ playlist.

2 thoughts on “Why I love: Spotify”