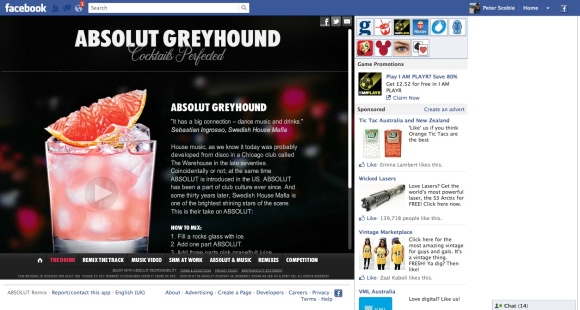 My sister-in-law is going through a Vodka phase. Apparently you don’t get hangovers when drinking Vodka. When my wife asked her if we could bring anything to dinner she requested the cheapest bottle of vodka available. After perusing the shelves of the local Vintage Cellars I recognised the usual brands. Apart from price I had no rationale for which Vodka to buy. I never drink it straight and find that, as it’s mixed, they all taste the same. Grey Goose was pricey. Absolut was on special. I recall friends talking up 42 Below. I got a bottle of Finlandia. It was one of the cheaper ‘name’ brands.

With Vodka on the mind I recently found a gem of an ad on my Facebook wall. Produced by TBWA\Chiat\Day the commercial features a bonic greyhound race on a saltplain desert. A Lady Gaga/Hunger Games inspired crowd cheers as the dogs race (powered by Swedish House Mafia Matrix style). It’s left of field and bold creative that captures the imagination and cleverly connects the brand to an aspirational sci-fi decadence that Ridley Scott would be proud of.

The campaign lives on via a Facebook App (calling out for Timeline optimisation) that includes a behind the scenes video, the ad (below) and digital decks allowing you to remix the Mafia tune and share it with your friends.

Best blogpost ever? Join the conversation below. Cancel reply